Bringing Living Proof to a city that was left to die

Before seven days pass, Mario Murillo Ministries will be able to say something astounding:  “We invaded the nation’s worst crystal meth region and then we invaded America’s most dangerous city.   While Yuba City still vibrates with the Spirit of God, we are already putting boots on the ground in Flint, Michigan.”

The picture you see is a major miracle.  That was when the mayor of Flint gave us the key to the city and proclaimed June 29th Mario Murillo Ministries’ day!  This weekend we return after several years. 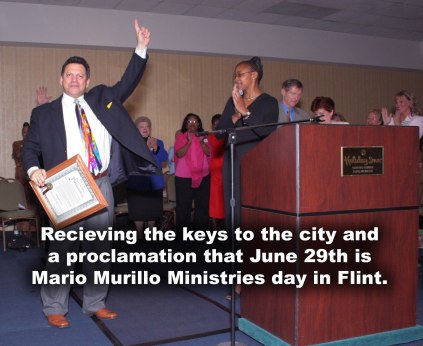 Nearly 1.1 million people have now read this blog.  Our regular readers are the most dangerous Christians in the world.  I know you by your comments.  You are alarmed at the disaster in America, but you are confident about God’s power to save our nation.

There is another thing about our regular readers that is amazing…they are, well, readers.   Facebook is making some people stupid.  (Facebook is even now listed as a top factor in divorce!)  This social media is a parade of catchy videos.  Reading is a lost art.

A person who reads something that makes them think is even rarer. That makes the success of this blog even more amazing.

Our regular readers need no explanation about why we are going to Flint, but others might.   So why are we going to America’s most dangerous city?   Let me answer that question with another question. Can you think of a better place for the miracles of Jesus to appear?  This phrase that ignited Yuba City also applies to Flint: “The people who walked in darkness have seen a great light.”

Mario Murillo Ministries believes in applying supernatural change where it is needed most.  Our battle cry is: “In the Name of Jesus, where there are devils, they are coming out, where there is disease and addiction, healing is coming in!”

Flint has a crime rate that is seven times higher than the national average. I am not trying to sell you on the misery and despair that oozes from Flint.  There is no way to really show you the epidemic of addiction and violence.  No city in America has been decimated the way Flint has.  If you could be here with me you would find it hard to believe that this is an American city.

No place in America embodies the devastating impact of empty-headed liberalism and corporate greed like Flint, Michigan.  Here is an American city left to die because General Motors and the Unions could not compromise.   Both of these groups used the good people of Flint as a bat to beat each other to death.  GM and the Union survived, but the city did not.

Then something worse arrived: the government.

If you were to pick the one thing that does the opposite of its intended purpose, it would be government programs.  They are an epic waste of money.

One huge reason we are back in Flint is Geneva Spears.  She has prayed and shared the Gospel in Flint for 30 years.  Here she is, doing what she does so well, rallying people to pray and leading them into revival.   It is an honor to work with her again.

My greatest conviction is revival.  There is no substitute for a moral awakening.  It is not simply the best thing, it is the only thing.   I am going to Flint to answer a question deep in my soul; if Satan can make Flint a trophy of hell, why can’t God make it a trophy of heaven?

I am asking for your prayers for this great endeavor.  And, if you live near this region join us for these amazing meetings.

The French politician who said Indian steel company ArcelorMittal should leave the country has told CNBC that his government is only acting like U.S. President Barack Obama.

Industry Minister Arnaud Montebourg, a member of the governing Socialist party, caused controversy last week when he said that the Indian company, which employs close to 20,000 people in France, should leave after it said it would have to close down a factory.

The French government announced on Thursday that it could nationalize the factory in question, with backing from an unnamed businessman.

The news raised the specter of the nationalizations of the early 1980s, which were instigated by Hollande’s predecessor Francois Mitterrand.

Montebourg is believed to be referring to the takeover of struggling automakers by the U.S. government earlier in the financial crisis.

Lakshmi Mittal, the tycoon who leads ArcelorMittal, met with Montebourg’s boss, Socialist President Francois Hollande earlier in the week, but the men appeared to have failed to resolve the issue.

Montebourg brushed off comparisons with that era. He said: “It’s a very good sign to send out (to investors). Nationalizing is a very modern step to take. Especially when you not only nationalize losses but profits as well, when you make public/private partnerships. This is our strategy.

“The strategy we’re putting forward is extremely modern and adapted to the current times of crisis. It’s a way of making the economy work in the interests of industry, more than just helping the financial sector,” he added.

He declined to answer a question about comments from Mayor of London Boris Johnson, who told Indian businessmen earlier this week to come to London instead of France.