BY BEN GEMAN AND CLARE FORAN

November 18, 2014 The Senate narrowly rejected legislation on Tuesday that would have authorized construction of the Keystone XL pipeline, dealing a bitter blow to politically imperiled Louisiana Democrat Mary Landrieu less than a month before her Dec. 6 runoff election.

The vote was 59-41 on the legislation, which easily passed the House last week.

The fate of the heavily lobbied bill, which required 60 votes to pass, was uncertain until final votes were counted. And ultimately, despite the senator’s assurances to the contrary, Landrieu was not able to garner the votes needed for passage.

Going into the vote, Landrieu knew she had 59 Senators supporting her motion, but it was never clear where she’d get number 60. Democratic Majority Whip Dick Durbin was seen as one of Landrieu’s last options, but he voted no on the bill.

The bill has become intertwined with the political struggles of the Louisiana Democrat as she faces an uphill battle in her bid for reelection against GOP challenger Rep. Bill Cassidy.

Senate Democratic leaders, after long preventing votes on Keystone, last week agreed to a floor showdown at the behest of Landrieu, a co-sponsor of the pro-Keystone legislation, who is seeking to show that she can deliver on pro-oil policies in a state where the petroleum industry is a big part of the economy.

But Capitol Hill Republicans, while unanimously backing the pipeline, have sought to prevent Landrieu from gaining political traction from the unexpected lame-duck Keystone fight. The latest House Keystone bill that passed last week was sponsored by Landrieu’s foe Cassidy.

Landrieu insisted she could secure 60 votes needed to pass the legislation with a filibuster-proof majority in the Senate as late as Tuesday morning. But despite the willingness of Senate leadership to allow a vote on the bill, Landrieu was not able to persuade enough Democrats to side with her in a vote to approve the pipeline.

The White House did not issue a formal veto threat on the project, but the president hinted in the days leading up to the vote that he would veto the legislation.

White House Spokesman Josh Earnest said Tuesday: “It certainly is a piece of legislation that the president doesn’t support.”

Legislation green-lighting the oil sands project is certain to come to Obama’s desk next year, however, when Republicans take the reins in the Senate. Soon-to-be Senate Majority Leader Mitch McConnell has pledged to move swiftly to authorize the pipeline.

TransCanada Corp.’s project would carry hundreds of thousands of barrels of oil each day from oil sands projects in Alberta, Canada, to refineries along the Gulf Coast. It would also carry oil from the booming Bakken formation in North Dakota.

Keystone is a big priority for Republicans and industry groups that have lobbied aggressively in favor of the pipeline. But it’s a political headache for Obama, and for Democrats in general, who are divided over the project.

Many labor unions back Keystone, but environmentalists–another pillar of Obama’s political base–bitterly oppose it and have mounted an aggressive campaign in recent years that has included numerous protests.

The Obama administration has spent six years weighing the project, and the president has repeatedly said in recent days that he wants to let the review play out. The president has also made critical comments about the project on his recent trip to Asia, buoying environmentalists.

“I have to constantly push back against this idea that somehow the Keystone pipeline is either this massive jobs bill for the United States, or is somehow lowering gas prices,” he told reporters in Myanmar four days ago.

Obama has also said that he will not approve Keystone unless he’s certain that building the project would not significantly increase carbon emissions.

Republicans, who have said the project is an economic win that will boost U.S. energy security, used the debate to increase political pressure on the White House over Keystone.

“I say to President Obama, time is up, and the excuses have run out. It is time for you, Mr. President, to make a decision,” said Sen. John Barrasso, a Wyoming Republican who is part of the GOP leadership team, during the floor debate Tuesday. Republican Sen. John Thune, who is also in leadership, noted that the pipeline has bipartisan support in Congress, and he said the Keystone opponents are “members of the far-left wing of the Democratic party.”

Environmentalists and Democrats against the project argue that Keystone will worsen global warming by serving as a catalyst for rapid expansion of carbon-intensive oil sands production in Canada.

“To protect the planet from catastrophic global warming, we need to leave four-fifths of the identified conventional fossil-fuel reserves in the ground,” said Sen. Jeff Merkley, an Oregon Democrat, ahead of the vote. “But building the Keystone pipeline would open the faucet to rapid exploitation of a massive new unconventional reserve–that is, the tar sands–making it much less likely for human civilization to succeed in meeting that carbon budget that is so important to our future economic and environmental world.”

But a major State Department environmental analysis published in January generally rebutted claims that the pipeline is a linchpin for growing oil-sands production.

It concluded that construction of Keystone–one of several new oil-sands pipelines that companies are proposing–is unlikely to affect the rate of oil-sands expansion. That’s because growing use of railways to move oil can pick up the slack, even though moving oil by rail is more expensive.

However, State’s analysis also predicts that if no new pipelines are built to handle expanded oil-sands production, oil prices remaining in the $65-$75 per barrel range could curtail production, but the study calls this unlikely. Oil prices have been falling for months, and West Texas Intermediate crude oil is currently trading at around $75 per barrel.

The Energy Department’s statistical arm this month estimated that oil will average $78 per barrel in 2015, which is well below its previous forecast. 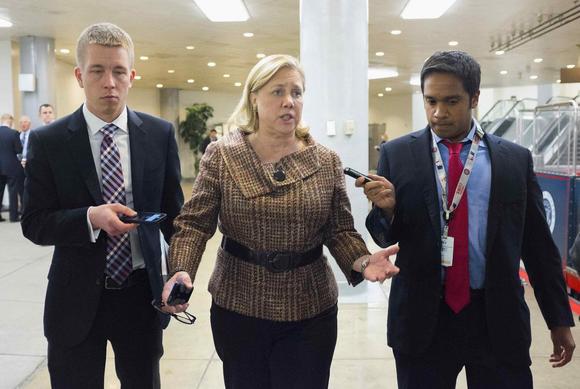 (Reuters) – Spooked by President Barack Obama’s low approval ratings, some of his fellow Democrats in tough November election races have begun their campaigns by distancing themselves from the White House and asserting their independence from Obama’s policies.

In what amounts to a survival-first strategy among embattled Democrats crucial to the party’s effort to keep control of the Senate, some candidates in conservative states Obama lost in 2012 are aggressively criticizing his healthcare, energy and regulatory policies.

Other Democratic senators facing tough battles for re-election have not been as critical of Obama, but have signaled they might not do much campaigning with him.

Democratic Senator Kay Hagan of North Carolina recently passed on a chance to appear publicly with Obama, saying she had another commitment. Begich and another Democrat up for re-election, Mark Udall of Colorado, have expressed skepticism about the idea of campaigning with the president.

Each of the Democratic senators is facing persistent criticism from Republicans who cast them as rubber stamps for parts of Obama’s agenda that are particularly unpopular in their states.

The growing distance between these Democrats and Obama’s White House was evident this week in Washington, where their responses to the president’s State of the Union address ranged from muted to chilly.

Begich said after the speech that, if Obama came to Alaska, he would be “not really interested in campaigning” with him, but would “drag him around” to show him how the administration’s policies have hurt the state by limiting oil and gas development and the issuance of logging permits.

“I don’t need him campaigning for me. I need him to change some of his policies,” Begich told CNN.

Democratic senators are not the only candidates in their party keeping some distance from Obama. In Wisconsin, a state the president won in the 2012 election, Democratic candidate for governor Mary Burke skipped an appearance by Obama in Waukesha on Thursday. She said she had a previously scheduled commitment.

Deciding how to handle a president in their party whose approval ratings are down is a common quandary for candidates in midterm elections. Many Republicans stayed away from then-President George W. Bush in 2006, when his slumping approval ratings and the unpopularity of the Iraq war helped fuel a Democratic blitz that gave the party control of both houses of Congress and most state governorships.

This year, the problem for Democrats is reflected in Obama’s sagging approval ratings after a year in which his healthcare overhaul got off to a rocky start, and critics have cast his policies as causing a decline in American influence around the world.

Reuters/Ipsos tracking polls on Thursday indicated that 38 percent of Americans nationwide had a favorable view of the job Obama is doing, while nearly 53 percent disapproved. A year ago, 52 percent viewed Obama favorably and 43 percent did not.

Obama’s low ratings have contributed to Democrats’ worries that regaining a majority in the Republican-led U.S. House of Representatives could be out of reach, and losing control of the Senate is a possibility.

In the 100-seat Senate, where Republicans need to win a net six seats in the November 4 elections to reclaim a majority, Democrats must defend seats in seven states where Republican Mitt Romney beat Obama in 2012. Obama’s ratings are particularly low in those states: Alaska, Arkansas, Louisiana, Montana, North Carolina, South Dakota and West Virginia.

Republicans have launched ads in several states reminding voters of the ties between Obama and local Democrats, especially Senate Democrats who supported the Affordable Care Act, the 2010 healthcare law also known as Obamacare. The law aims to help millions of uninsured Americans get health coverage and provides a range of consumer protections. Republicans say it will raise costs and limit healthcare choices.

“It’s going to be very difficult for a lot of these Democrats because they will own Obama’s agenda, no matter how hard they try not to,” said Brad Dayspring, a spokesman for the National Republican Senatorial Committee.

“Obama will be a drag on them because he reminds voters of how far the party has shifted to the left.”

HAVE TO BE ON THE OFFENSIVE

Obama and his aides have largely sidestepped questions about the efforts of fellow Democrats to distance themselves from the president, who will talk with senators at a Democratic retreat next week.

Senate Democratic Leader Harry Reid said this week he expected the party’s Senate candidates to welcome Obama into their states to campaign. Democratic strategists, meanwhile, are casting the November elections as contests between candidates, not a referendum on the president.

“What those candidates have to decide, especially in those tough states, is how they are going to talk about these big issues like Obamacare,” said Democratic strategist Chris Kofinis. “They have to be on the offensive.”

Senator Landrieu, who is likely to face a difficult re-election battle against Republican Rep. Bill Cassidy, recently introduced legislation to allow people to keep their health insurancepolicies even if those policies did not meet Obamacare’s new requirements for coverage. In her first campaign ad, she criticized Obama for breaking his promise that all Americans who liked their health plan could keep it.

Pryor, who faces a challenge from Republican Rep. Tom Cotton in Arkansas and is perhaps the most vulnerable Senate Democrat up for re-election, seemed to echo Republicans’ criticism of Obama after the president’s speech before Congress on Tuesday.

Pryor highlighted his opposition to Obama’s push for gun control and additional farm regulations. Pryor also was critical of delays by Obama’s administration in deciding the fate of the Keystone XL pipeline, which would help bring oil from Alberta, Canada, to refineries on the U.S. Gulf Coast. Pryor supports the pipeline.

West Virginia Democrat Tennant, who has an uphill battle against Republican Shelly Moore Capito to keep a Democrat in Rockefeller’s seat, has been criticizing the administration’s regulation of the coal industry, saying it was eliminating jobs in her state.

“If the president wants to promote opportunity, he needs to rethink his energy policies. The president is wrong on coal and I will fight him or anyone else who wants to take our coal jobs,” Tennant added.