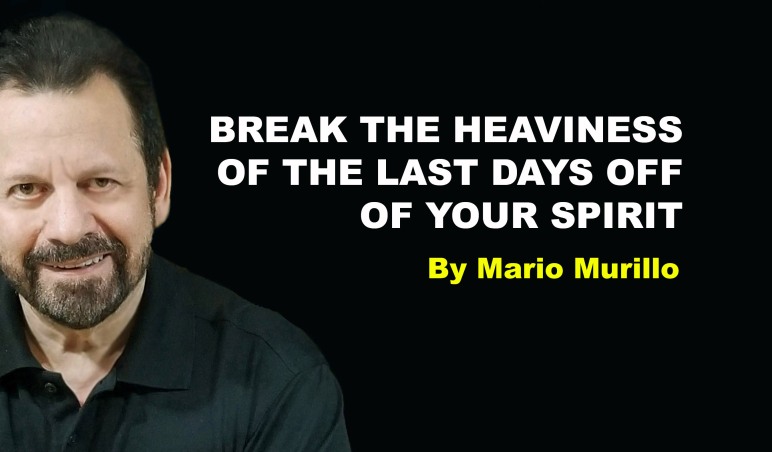 The constant barrage of terrifying headlines and mainstreaming of perversion vexes the child of God.  These verses from Second Peter have never been more relevant than now: “and delivered righteous Lot, who was oppressed by the filthy conduct of the wicked 8 (for that righteous man, dwelling among them, tormented his righteous soul from day to day by seeing and hearing their lawless deeds)— 9 then the Lord knows how to deliver the godly out of temptations and to reserve the unjust under punishment for the day of judgment…” 2 Peter 2:7-9

Angry debates, violent rioting, filth paraded in the streets, Christian leaders renouncing their faith, persecution, and constant bad news can drain the sanity from our souls.

Not only this, but we are forced to keep all our enormous frustrations inside of us. While stupidity and wickedness get a megaphone—wisdom and righteousness get duct tape over their mouths.

These are the times that rob inner peace—that bring intense restlessness—that drain all the color and enjoyment from our life.

These are the times Jesus warned us of—and that He gave us direction for.

First He said, “And you will be hated by all for My name’s sake. But not a hair of your head shall be lost. By your patience possess your souls.” – Luke 21:17-19

Talk about mindless hate! Both the liberals and the feminists have incredible bias for Islam and sheer hatred for Christ and Christianity. It is mind-bending.  It makes zero sense.  Yet that is exactly the kind of irrational hatred our Lord predicted. It is weariness to believers who share their faith openly.

Then Jesus said, “But take heed to yourselves, lest your hearts be weighed down with carousing, drunkenness, and cares of this life, and that Day come on you unexpectedly. 35 For it will come as a snare on all those who dwell on the face of the whole earth.” (Luke 21:34)

The dumbest thing anyone ever said to me was, “When you come to Jesus, your problems are over.”  I never had problems until I met Jesus!  I kept wondering, “Why am I being attacked?  Why am I being shot at from all directions?  Why do I meet stiff resistance every time I try to do something meaningful for Jesus?”

Does this sound familiar? You walk through life, minding your own business and wham!  A co-worker rages at you for no reason. Money evaporates.  Your health fails.  Loved ones abandon God.  Someone makes an irrational defense for wickedness. A confluence of demonic attacks falls on you.  Life has never felt so cruel and unfair. 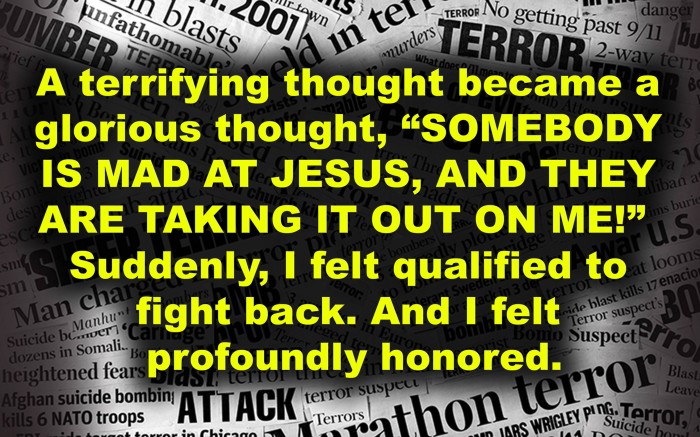 At the apex of one of these attacks, something happened to me.  A terrifying thought became a glorious thought, “SOMEBODY IS MAD AT JESUS, AND THEY ARE TAKING IT OUT ON ME!”  Suddenly, I felt qualified to fight back. And I felt profoundly honored.

Think about it!  A soldier does not go to war because he has a personal grudge against the enemy.  He didn’t declare war—his nation did.  He is not responsible for the battle plan—the military is.  He is not paying his own way to the war—his government is.

Let’s take a look at the things that are not the soldier’s responsibility:  The training he needs; the weapons he uses; the food and shelter he requires; the assignments he receives—these, and a host of other things, are not his responsibility.

The soldier does not create the organized army.  He does not carry the weight of how the war will be won. If he sits in the foxhole feeling alone and unfairly attacked, it is because he has forgotten who he is and why he is being attacked.  He has taken the battle into his own hands!

But when he remembers that he was recruited—when he recalls that he is not alone, but part of a victorious army, and all he is called to do is obey orders, it changes everything!

When we take the attack personally, we lose hope.  But, when we say, “The battle is not mine, it’s God’s,” we cannot be defeated.  Let’s stay out of things that do not concern us.  Let’s keep our conflict in the hands of God.  We must discern when we are operating in our own strength and by our own wits.

Remembering your attacks are not personal is plainly seen in these verses where Jesus speaks about conditions in the last days:  Luke 21:12 “But before all this occurs, there will be a time of special persecution, and you will be dragged into synagogues and prisons and before kings and governors for My name’s sake. 13 But as a result, the Messiah will be widely known and honored.  14 Therefore settle it in your hearts not to meditate beforehand on what you will answer; 15 for I will give you a mouth and wisdom which all your adversaries will not be able to contradict or resist.

Paul experienced the same thing: Philippians 1:12 “But I want you to know, brethren, that the things which happened to me have actually turned out for the furtherance of the gospel…”

Right now we have a presidential election that embodies everything that is wrong with our nation.  It is a hair-pulling, maddening, terrifying, and draining moment for believers. We must put the battle back in God’s hands and let Him replenish our peace and our joy.

Is someone mad at Jesus, and are they taking it out on you?  What an honor!  What an opportunity!  Whenever Satan comes at you, let Jesus come at him!

The first time an angel stares at you in heaven with wonder and admiration for your service to Christ, you will know why your trials were worth it all.  The first time you hear Jesus say, “Well done, good and faithful servant,” you won’t remember the suffering, the trials, or the battles.

No wonder Paul said, “For I reckon that the sufferings of this present time are not worthy to be compared with the glory which shall be revealed in us.”  -Romans 8:18