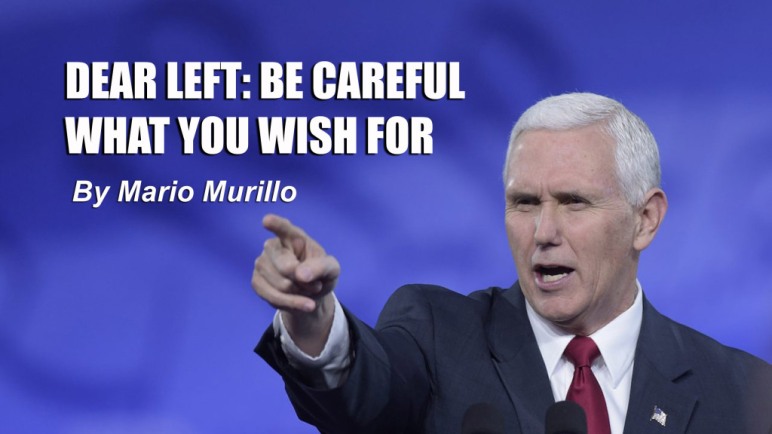 Dear Left…you’re salivating at the thought of throwing Trump out of office.  Be careful what you wish for.  You are truly in a lose-lose situation.

I know, I know…some Christians are wringing their hands at all the drama going on right now.  But I am at total peace.  These histrionics are simply proof of two things: President Trump is not a politician.   And who could have foreseen, when he started draining the swamp, how vicious and abundant the monsters.

Trump is impulsive?  In a zombie apocalypse, you must act fast!

So, go ahead and dump him.  You never will, but let’s just say you did.  You’d bring to power the most committed Christian who has ever been president.

Don’t get me wrong I respect Donald Trump, I believe he is a man of faith, but I might not crown him theologian of the year.  Mike Pence, on the other hand, knows the Bible well.  He will take a strong stand for godly principles.

And so, dear left, if you get your wish, …here is who, and what, will be in the White House:

He is even more socially conservative than Donald Trump.   Mike Pence is stronger on abortion, and marriage than Trump.  For social progressives, this is exit frying pan enter fire.

And if you think you can use the tactics you currently use on Donald Trump…consider the Mike Pence temperament.  He is calm, measured, listens before he speaks, uses few words and leads a squeaky clean personal life.  He is the yellow journalist’s worst nightmare.

I can’t wait for Stephen Colbert, Rachel Maddow and Don Lemon to try to tell us what an evil person Mike Pence is.

Remember the vice-presidential debate?  Recall how he reduced Tim Kaine to a caterwauling infant.  The more Mike stayed calm, the shriller Kaine became.  It looked like a school principal talking to a hysterical junior higher.

Instead of the zingers from Trump (which I love) you will get the rational, considered opinion that demolishes stupid questions. (Which I also love).  You really want that?

Mike Pence also has bi-partisan support—even from those that disagree with his convictions.

Left-wing God haters rest between the proverbial rock and a hard place.  For those who want one nation under God, Mike Pence would reinforce it

Trump is an answer to prayer.  He is the wrecking ball to corruption in both Democrats and Republicans that we so desperately needed.  This just in:  Trump will not be thrown out of office.  Donald Trump will fulfill his destiny.